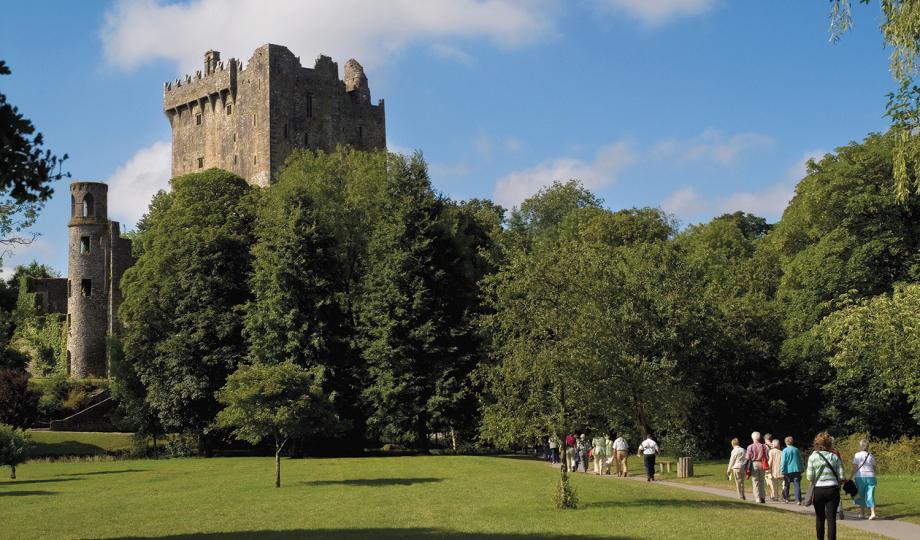 Dating back to the 10th century, Blarney Castle has played a large role in many of the trials and tribulations that Ireland has seen in past centuries. Located in Blarney, County Cork, this national landmark is one of Ireland’s most famous tourist destinations for its historical significance and enchanting legends.

Blarney Castle is a medieval stronghold located near the River Martin. Reaching to approximately 90 feet high, the current building that still stands is the third castle to be erected at this site, built by MacCarthy of Muskerry Dynasty. Before the castle that you can see today was completed, the first building put into place was a wooden structure built in the 10th century. Later on, this was replaced by a second structure around 1210 AD. Because of its weak foundations, the second building was demolished, and later on in 1446, MacCarthy built the third structure that still stands today.

This historical landmark has seen many changes of power and ownership during its time. In 1646 during the Irish Confederate war, the castle was forcibly besieged under Lord Broghill, until the restoration of King Charles II to the English throne during which the castle was restored to Donough MacCarthy, the first earl of Clancarty. During 1690, the MacCarthy’s had their lands confiscated after being taken prisoner, and Blarney castle was taken by the Williamites during the Williamite war.

After the MaCarthy’s lost the castle forever, it was sold a numerous amount of times before landing in the possession of Sir James Jefferyes, the Governor of Cork City, in 1703. The Jefferyes added multiple foundations on the castle grounds including a gothic mansion named The Court that was later destroyed in a fire in 1820, a model estate village built in 1765 by James St. John Jefferyes, who inherited the land in 1740 and the Rock Close that was landscaped in 1767. In 1874, just 200 yards south of the castle, Blarney House was built, and is now restored and open to the public during the summer months.

The famous Blarney Stone is one of the main attractions that drives visitors to Blarney Castle. Set into the tower itself in 1446, millions of people including politicians, actors, and tourists from all over the world have visited the castle to fulfill the legend by kissing the stone. While many tales exist about the origin of the Blarney stone, the widely accepted legend says that Robert the Bruce of the Battle of Bannockburn gave half of the legendary Stone of Scone to Cormac MacCarthy in gratitude for supplying between four and five thousand men from Munster to supplement his army. Legend has it that those who kiss the Blarney stone will be bestowed with the gift of eloquence, or, being able to speak or write persuasively.

The Term “Blarney” over the years has come to mean clever, flattering, or coaxing talk. The word itself originates from the legend concerning Queen Elizabeth and Cormac Teige MacCarthy. It’s said that in 1602, MacCarthy, the Lord of Blarney was being pressured by Queen Elizabeth, the queen of England and Ireland at the time, to swear full loyalty and allegiance, as well as hand over all lands including the castle. While he pledged his allegiance verbally without fault, none of the exchange of power and land ever moved forward, causing Queen Elizabeth to state “This is all blarney; what he says he never means”.

For over two centuries, visitors from all over the world have set out to climb the steps to kiss the Blarney stone. Although a popular tradition, kissing the stone is not as easily done as one may think. Years ago, in order to kiss the stone, visitors were held by the ankles and lowered head first over the battlements at a drastic height. Now, to ensure the safety of those who wish to take part in the legend, visitors must lean backwards over the edge from the parapet walk while holding onto an iron railing, usually assisted.

The Blarney Stone is only a small part of all the attractions the castle has to offer. Today the Blarney Castle itself remains in partial ruin, but this does not lessen the impact of its historical significance and outward majesty. The architecture of this building allows the castle to look vastly different from all different angles. From warlike, to magical, whichever side you view the castle from, you won’t be disappointed.

Don’t forget to take a moment to journey through the vast variety of gardens that Blarney Castle has to offer. One of the few Poison gardens in all of Ireland is located on the Blarney castle grounds behind the battlements. Here you will find plants from all over the world that are so dangerous and toxic that some of them must be kept cage like structures. Contrasting to this, you may choose to embark on the Himalayan walk, where many of the plans are inspired by exotic locations like India and Vietnam. Blarney castle has a diverse array of wildlife, some of which is completely unique to the location. Below is a list of all the beautiful diverse gardens that can be visited on the Blarney Castle grounds.
● Poison garden
● Fern Garden & Ice House
● Arboretums & Pinetum
● Herbaceous Border
● Bog Garden
● The Seven Sisters
● Himalayan Walk
● The Jungle
● Woodlands, Rivers & Lakes

The Rock Close is one of the most fascinating locations that Blarney Castle has to offer. A combination of nature and art, this hidden nook comes with no shortage of enchanting things to discover. Relax on this natural terrace placed just above the smoothly gliding river, or descend down the set of stone steps called “The Wishing Steps” to have your dream come true. From the Fairy Glade to the Witches Kitchen, the stroll around the Rock Close gardens is nothing short of magical.

Whether you are planning a trip Blarney Castle with the intention to kiss the Blarney Stone, or visit the various gardens, this historical landmark has a lot more to offer than you may realize. Rich with centuries of history and enchanting urban legends, Blarney Castle is a must see for anyone planning a vacation to the majestic country of Ireland