What you didn't know about Ireland's second-most favorite saint

St. Patrick isn’t the only saint that gets a day of global celebration. Ireland’s second-most beloved saint, Brigid, has her special day on February 1. Brigid is associated with many miracles related to healing, and it's fitting that the day to commemorate her is also the traditional first day of spring in Ireland. Celebrations have been going on in Ireland for centuries, and in recent years have spread to the Irish diaspora - and this year, you'll be able to participate in many of the celebrations from the comfort of your couch.

Celebrate Brigid at home this year

Irish communities around the world are running a wide variety of online events celebrating the creativity of women – poetry, films, talks, and more. Some of them extend into a few days in February. Here are a few pages to find more information for celebrating the day online:

ToBeIrish.ie - this site from the Irish Department of Foreign Affairs details events around the world.

EPIC: The Irish Emigration Museum - a free pack for kids 8+ to explore Brigid and the many tales around her life.

Brigid: a generous soul - and a brewer of ale

How much do you know about this inspiring saint? Here are a few of our favorite facts about St. Brigid:

St Brigid was born in 451 in Dundalk in Ireland and died in 525. Born to a Christian slave who had been baptized by St. Patrick and a father who was both pagan and a wealthy chieftain in Leinster, she shares a name with the Celtic pagan Goddess of fire. She was a slave from birth,  and was returned to her father as a child to be his servant. There is some controversy over whether she existed at all, with some speculating that she was invented to Christianize the old Celtic goddess, while others suggesting she was simply named after her.

Known for her generous nature, Brigid was freed from a life of bondage after her father, named Dubhthach, tired of her giving away his possessions to the needy. Dubhthach had brought Brigid to the King of Leinster, intending to sell her. While her father spoke to the king, Brigid gave away Dubhthach’s jeweled sword to a leper, enraging her father but prompting the Christian king to recognize her holiness. The king declared that her father should leave her alone, “for her merit before God is greater than ours”, freeing Brigid to follow her faith.

3.    She established a monastery in Kildare

Brigid would go on to become a nun, and a disciple of St. Patrick. She founded several monasteries, including a vital center of religion and learning in Kildare, as well as a school of art that taught metalwork and illumination. The ornate beauty of an illuminated manuscript done by the scholars of Kildare prompted a medieval scholar to say “all this is the work of angelic, not human, skill”; sadly, the book has been lost for centuries. But today, the cathedral of Kildare stands on the site of one her early churches.

4.    Her feast day marks the traditional beginning of spring in Ireland

February 1 was originally celebrated as a pagan festival called Imbolc, marking the midpoint between the winter equinox and spring solstice, and the arrival of longer, warmer days. February 1 is when the daffodils start to bloom, the evenings start to lengthen, and the gloom of winter goes on its way. Brigid would be symbolically welcomed in Irish homes on the day, with a symbolic offering of food and drink. It is also traditional to make St. Brigid’s crosses out of rushes (a straw-like plant); people believed in olden days that these crosses would protect their thatched homes from fire.

But that’s not all – she’s also the patron saint of midwives, newborns, Irish nuns, fugitives, blacksmiths, dairymaids, boatmen, chicken farmers, cattle, scholars, sailors, and no doubt many more. She is also, along with Patrick and Columcille, one of the three patron saints of Ireland.

6.    Brigid has a special place in the hearts of brewers

Like many women of her time, Brigid was a brewer of ale, and several of her miracles are associated with beer. In those days, beer was regarded as a sanitary, more nutritious alternative to water. Once asked for help by a party of thirsty lepers, Brigid spotted some bathwater being prepared; after she blessed the water it was transformed into beer. Similarly, she once transformed dirty bathwater into clean beer for visiting priests.

Her fondness for beer is commemorated in this delightful poem from the 10th century, in the voice of Brigid:

I'd like to give a lake of beer to God.
I'd love the heavenly
Host to be tippling there
For all eternity.

I'd love the men of Heaven to live with me,
To dance and sing.
If they wanted, I'd put at their disposal
Vats of suffering.

White cups of love I'd give them
With a heart and a half;
Sweet pitchers of mercy I'd offer
To every man.

I'd make Heaven a cheerful spot
Because the happy heart is true.
I'd make the men contented for their own sake.
I'd like Jesus to love me too.

I'd like the people of heaven to gather
From all the parishes around.
I'd give a special welcome to the women,
The three Marys of great renown.

I'd sit with the men, the women and God
There by the lake of beer.
We'd be drinking good health forever
And every drop would be a prayer. 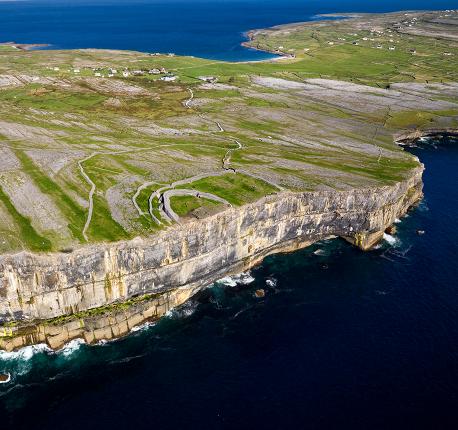 Explore hidden gems along with tried-and-true favorites on this self-drive adventure. Begin with a stay in a beautiful Georgian mansion, visit medieval Kilkenny, and ferry across Galway Bay to the…