Catherine Martin, Ireland’s Minister for Tourism, was the honored guest at the US tour operator’s anniversary event in Dublin, along with a special congratulatory message from Ireland’s Prime Minister, Micheál Martin.

More than 150 attendees gathered at the Westin Dublin to mark the occasion and celebrate the long collaboration between Ireland and North America, including hoteliers, attraction partners, DMO tourism leaders, representatives from the Irish government and CIE Tours employees.

During the evening, guest of honor Catherine Martin, Minister for Tourism, addressed attendees by distinguishing CIE Tours as a leader in the Irish tourism economy. She noted that the US operator has earned a reputation for excellence in Irish hospitality.  Since its establishment, CIE Tours has brought more than three million tourists to Ireland from North America.

A panel discussion led by Stephen Cotter, COO of CIE Tours, featured two of the company’s suppliers, Martin Feeney, owner of Atlantic Sheepdogs, and Phillip O’Neill, Group General Manager of Dalata Hotel Group. The panelists shared personal stories of how the tour operator has worked with their respective companies to develop and grow their local businesses over the years.

A Special Message from the Prime Minister

As a testament to CIE Tours’ leadership position in Irish tourism, the 90th anniversary celebration culminated with a special video message from Ireland’s Prime Minister, known as the Taoiseach, Micheál Martin. In his congratulatory remarks, the Taoiseach recognized CIE Tours’ contribution to Ireland’s tourism economy, including support of employment in rural areas by taking visitors to all corners of the country. The Taoiseach noted, “You have also played an important role in sustaining the special link between Ireland and America over many, many decades. With nine decades of experience and strongest satisfaction, I am confident that CIE Tours will continue to grow from strength to strength.”

After the evening concluded, Elizabeth Crabill said, “It has been an honor and truly gratifying to be supported and congratulated by so many tourism partners and government dignitaries.  CIE Tours is committed to the growth and sustainability of Ireland tourism, and we look forward to continuing to strengthen and further develop our business in this remarkable destination.” 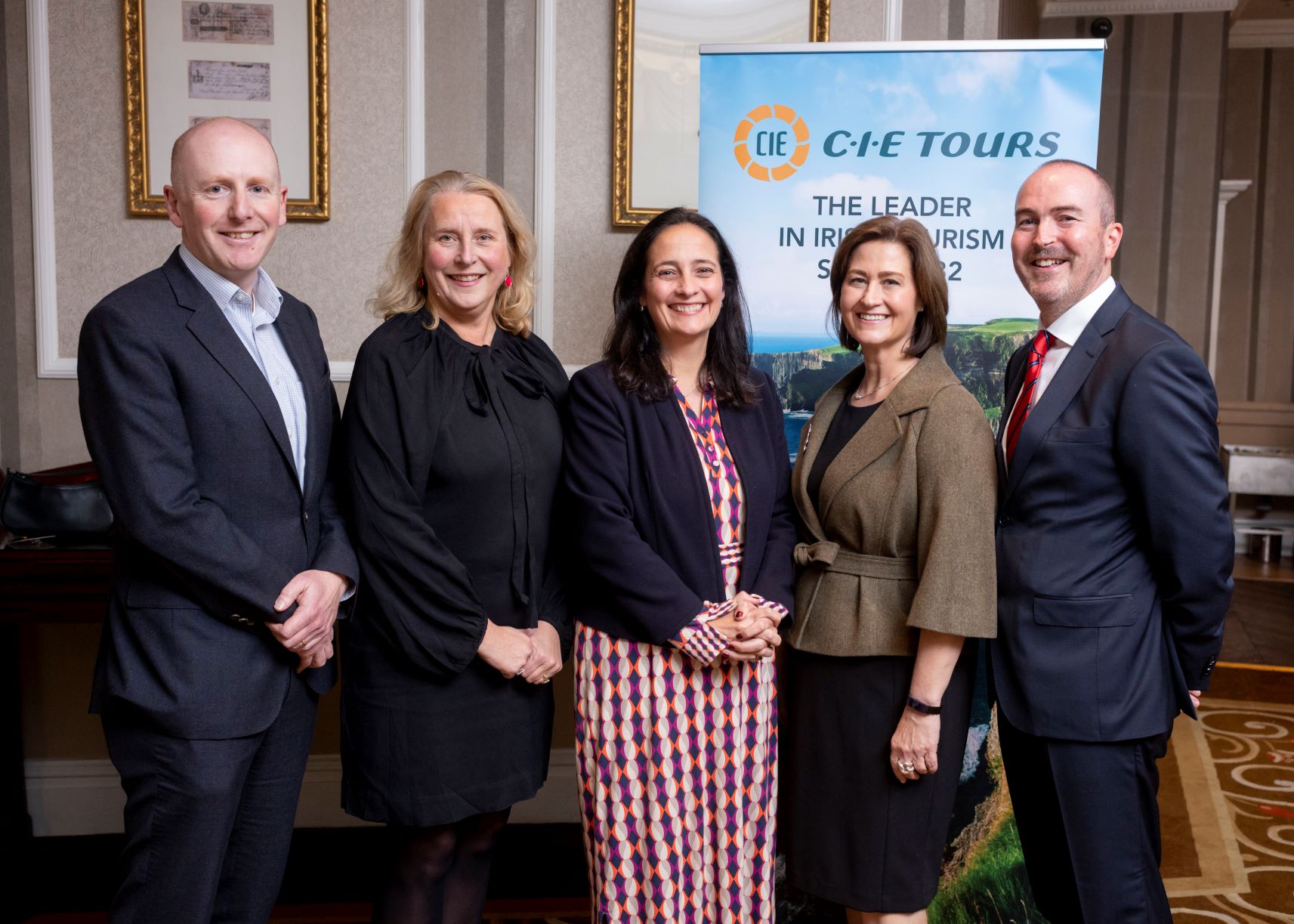 The next day, the CIE Tours leadership team met in person with the Taoiseach who spent time reminiscing about the deep connection that he and his family have to CIÉ. The Taoiseach’s late father, Paddy ‘Champ’ Martin was not only an international boxing champion for Ireland but was a Cork-based CIÉ bus driver for years.  Mr. Martin has remarked that childcare in his youth often meant doing his homework while seated at the back of the No 4 bus that his father drove in Cork city.

Since 1932, CIE Tours has been the premier tour operator for Ireland and Britain vacations, earning a reputation for excellence rooted in its signature Irish hospitality.  The 2022 travel season marks 90 years of operation for the Morristown, New Jersey-based company, during which it has taken more than three million travelers on the vacation of their dreams.  Expertly crafted vacations to Ireland, Scotland, England, Wales, Iceland and Italy suit every travel style and taste - from the camaraderie of coach tours and custom group travel; to a variety of independent adventures, small group tours and personalized private driver experiences.

CIE Tours takes care of every detail and provides exclusive access, authentic experiences, and in-depth knowledge of each destination. Only CIE Tours offers the “All-In Inclusive Advantage” which guarantees that every experience and most meals are included, so there are never any hidden expenses.  Above all, the genuine warmth and expertise of its guides and hosts shines through, with guest satisfaction ratings of 95%.  For more information, visit www.cietours.com.